History informs us that the Lodge derived its name from the 8th RW Provincial Grand Master of Cheshire, Field Marshall Viscount Combermere. Born Stapleton Cotton on the 14th November 1773 at Llewenny Hall, Denbeighshire, he was the second son of Sir Salisbury Cotton. His adult life was dedicated to serving his Country in military service and also as a Politician.

During his military service he saw action in 17 battles.

He saw active service with the British forces at the Cape in 1795 and in 1799 served in the Indian province of Madras against Tippo Sahib at Malavelly and Seringapatam.

Returning to England he served as MP for Newark between 1806 & 1809. In 1809 he returned to active service in the Peninsula War. That year whilst serving General Wellesley 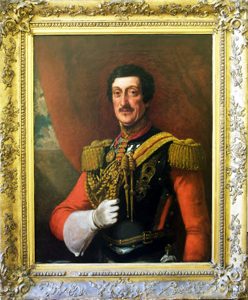 (later The Duke of Wellington) he led British forces in Spain at the battle of Talavera against the Spanish & Bonaparte’s French army. In 1812 he was promoted to Lieutenant General and again under the now Duke of Wellington he led British forces at Torres Vedras.  Due to his immaculate uniform which contained much gold braid,  the Spanish forces nicknamed him “The Lion of Gold”. On the 22nd July 1812 he led British Cavalry in the Battle of Salamanca where he sustained a serious wound to his right arm. His actions on that day earned him praise from Wellington. Salamanca forms an important part of our Lodge Banner.

Upon his return to England on the 17th May 1814 he was made Baron Combermere and given a reward of £20,000. In 1817 he was appointed Governor General of Barbados, during which time he oversaw the infamous ‘Moving Coffins’ mystery. He was appointed Commander in Chief (India) in 1825 where he captured the fort of Bhurtapore. Sir Stapleton was created Viscount Combermere on the 2nd December 1826. He returned to England and once again served as an MP. In 1830 he became the 8th RW Provincial Grand Master for the Province of Cheshire. In 1852 he approved and sanctioned the petition to form the Lodge which was duly constituted & consecrated on the 2nd December 1852. In 1855 he succeeded the Duke of Wellington as Constable of the Tower of London, and also in that year he was also appointed Field Marshall. His last military duty was undertaken in 1863, when at the age of 90 he headed the Guard of Honour at the wedding of Edward, Prince of Wales. Viscount Combermere died in 1865 aged 92. He had been Provincial Grand Master for the Province of Cheshire for 35 years. He was buried in Wrenbury Churchyard near to Whitchurch. Later that year a life sized statue of him was unveiled to his memory close to the entrance of Chester Castle and the Grosvenor Bridge. He is depicted on horse back with his cocked hat doffed in salute.